“Seeing nature in the city is only a matter of perception”- Anne Spirn. The Granite Garden.

At least since the turn of the century, attention to nature in cities is increasing – from Transition Towns to green design, from Edgelands to Field Notes from a Hidden City. 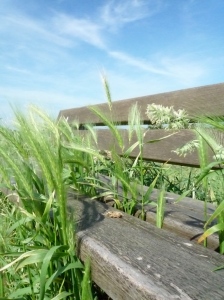 There’s also wealth of research on the benefits of urban nature and even, which surprised and delighted me, research that suggests committed urbanites may actually prefer urban nature to more traditional nature.

An extensive study from the late 1980s, conducted by Jacquelin Burgess et al, found that so-called “unofficial green areas”, such as the greenery separating sidewalks from roads, and other strips of green – is valued more than “official” green spaces such as parks or the countryside (460). The subjects in this study valued urban nature particularly for its being urban nature, not just as a remnant or echo of some kind of ideal, or unspoilt, nature that has been lost. Rather, these public open spaces were important to them because “they have the potential to enhance those positive qualities of urban life: variety of opportunities and physical settings; sociability and cultural diversity” (471).

A lot of current nature writing is about, as Anne Spirn suggests, simply seeing nature in the city. In Edgelands Paul Farley and Michael Symmons Roberts describe precisely those in-between spaces – often urbanized – that form a kind of no-man’s land between the countryside and the city. While some of their chapters – on sewage plants for instance – relate specifically to spaces outside of cities, others – such as the chapter on wastelands – are recognizable urban spaces. Only if we see them, and develop a language to describe them, can these spaces truly be valued, Farley and Symmons Roberts argue. A similar point is made in a great guestpost by Naomi Racz on the Center for Humans and Nature Blog. In “On the Benefit of Monomania” she refers to Robert Macfarlane’s advice to “become a monomaniac”, and study one thing, one species, one stretch of river, to hone the skills of the nature writer. Such monomania, Racz argues, is particularly needed in the city:

In a way, the city demands this of us. Despite the terms used to describe cities—sprawl comes to mind—they often draw us in on a much smaller scale. The weed growing through a crack in the pavement has become something of a cliché, but it does suggest an important point about nature in the city and our attachment to the cities we live in.

Indeed, in cities, nature is often not that which immediately draws attention, unless we explicitly look out for it. There’s so much going, so much sound, so many people, so many impressions, that we may easily get caught up in the social swirl, without looking up at the sky and the trees, or paying attention to the changing seasons.

Yet promoting this kind of dedicated searching for nature in the cities may – and has – also led to charges that urban nature is too fragmented to enable “real” nature experience, whatever that may be. One of ecocriticism’s founding fathers, Lawrence Buell, for instance, clearly struggles with urban nature in his work. Although he does discuss it obliquely – in The Future of Environmental Criticism, for instance – he repeatedly comes to the conclusion that urban nature is somehow “lesser” than the non-urban kind. A particularly explicit example of the bias some ecocritics hold towards urban nature is an article by Lee Rozelle, in which he claims that “the terms urban and ecology, when placed together, seem a most dangerous oxymoron; to make such easy semantic fusions, however intriguing the academic result, leaves the door open for the referent – voiceless nature – to become critically restricted” (109). According to some ecocritics – and no doubt, other environmentalists as well – discussing urban nature may lead to silencing already ‘voiceless’ nature. Of course, anyone who wakes early around this time of year will hear that even in the city, nature is anything but ‘voiceless’, as birds announce the coming of a new day, and spring, with gusto.

The true challenge, then, is not so much to just see urban nature, but to see urban nature as a unique kind of nature. All too often, nature in cities is interpreted as signifying “absence” – to use the term John Tallmadge employs in The Cincinnati Arch. And it is indeed all too easy to interpret urban nature in terms of traditional nature: the beautiful urban garden reminiscent of a slice of the countryside, the secluded corner of a park that reminds us of the peace and quiet of wilder, and quieter, places away from the city. But in order to truly see nature in the city, we need a language and imagery to describe nature that is uniquely urban.

One of the best examples of such urban nature is the urban wasteland – celebrated by Farley and Symmons Roberts as being “incredibly biodiverse and locally rich in species that find an ecological niche, and opportunity” (145). Melissa Harrison’s novel Clay includes a number of beautiful passages on such a wasteland. It is a typically urban space, that merges the nonhuman natural and man-made. To the young boy who discovers it, it doesn’t matter that there are “unnatural” elements in it: the roof tiles, buckets and coils of wire sticking out of the ivy weren’t litter. Instead, “he could tell it had all been here for ages, and was part of the place, somehow” (147).

Seeing urban nature, then, is just the first step – recognizing its imaginative power to connect us to more than ourselves, particularly in a time of climate change and increased urbanization, is the next.

I explore this topic in more detail in two articles: “Wastelands, Shrubs and Parks: Ecocriticism and the Challenge of the Urban” (Frame 26.2 [November 2013]), and in “Re-Approaching Urban Nature: Ecocritical Readings of Contemporary Humanized Landscapes”, forthcoming in Alluvium.